Last March 17-20, 2012,  I was blessed to finally see Cebu. I’ve always wanted to go and really excited to celebrate my birthday there.  There are so many memorable moments that I would like to share with you but let me just give you a tip about hiring a car/taxi when you’re in Cebu.

Cebu has the look and feel of Manila. Their Ayala Mall, SM Cebu and IT Park are just like what’s in Makati, Edsa and Ortigas respectively. Well, there are of course  many places that’s really a “Cebu” thing but most of the time, my eyes are deceived by areas like those. Sometimes, I feel like I’m in Makati or Ortigas. The people are very kind and friendly too.  The price of commodities are the same including the fare on AUVs (that’s their jeep there) and taxi flagdown (Php 40 as of this writing).

Going anywhere to Cebu is really easy. Taxis are everywhere. However, if you’re planning to have a city tour in Cebu (on your own), I would recommend Danny Noy’s Taxi. While the taxi is a bit worn out and not the latest model, it can still drive you anywhere you want.  =)  His rate is Php 250 per hour which is cheaper if compared to renting private cars.  The rate for airport-hotel-airport transfer is Php300 per way which is also economic. He also has several contacts so if he’s not available, he could arrange you with other driver/taxi with the same rate. If you’re not that “maselan” and you’re touring in a budget, Danny Noy’s taxi is a money-saving alternative.

We never had the chance to meet Danny Noy because he has another driver/tour guide who drove us to many landmarks of Cebu. But I got a picture of his taxi below. We only found him in the Internet and read some good reviews. So I’m spreading the word too. 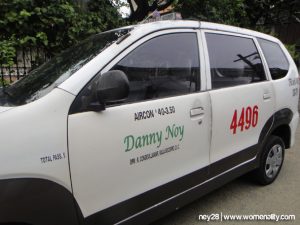 Our tour lasted for 8 hours (and that includes the View Tops which is a little far from the city but worthy to visit). We also had to add Php 300 because it is on top of the mountain. So we only paid Php 2,300 for the whole day taxi service. Entrances to museums and such are not included.

4 thoughts on “Danny Noy — Taxi For Hire in Cebu”