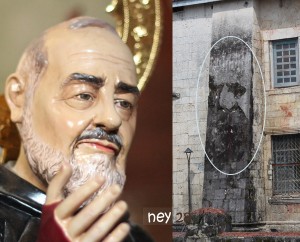 One of the remarkable churches we visited in Bohol is the Baclayon Church. It is one of the oldest stone churches built during the Spanish era. Currently, there is a museum next to the church that houses significant artifacts and memorabilias that are being preserve for hundreds of years already. I can’t even forget the 18th century marriage log book there. And I felt like living in the past. So sad that cameras are not allowed so I can’t show any pictures.

Anyways, what makes this church interesting, aside from its rich history is the image of Father Pio on one of the pillars of the church. Father Pio is one of the early Italian priests who have settled in the Baclayon Church and believed to have healing powers. He is also famous for his stigmata – the Christ like wounds that he bore in the palm of his hands. According to our guide, his body is still preserved. He was proclaimed as 462nd saint in 2002 and now called as St Pio of Pietrelcina.