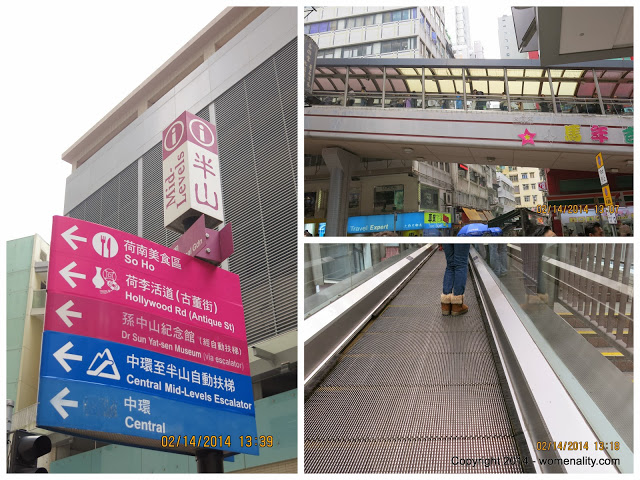 Did you know that the Mid-Level Escalator in Hong Kong is the longest covered escalator system in the world? According to the Wikipedia,  “The entire system covers over 800 metres (2,600 ft) in distance and elevates over 135 metres (443 ft) from bottom to top.  It was constructed in 1993 to provide a better commute by linking areas within the Central and Western District on Hong Kong Island. It consists of twenty escalators and three inclined moving walkways. ” It could take you an approximately 20 minutes to got the uphill.  And we’ve been there from the bottom to top of its line up during our 2014 6-Days tour in HongKong.

We learned this place from one of Biyahe ni Drew’s Hong Kong episodes in YouTube. We got intrigued because it’s holding the badge of being the longest outdoor escalator system in the world and we want our footprints there.  We went there at the noon of Valentine’s Day.

There’s not much you can do in the the Victoria Mid-level Escalator since it was built to provide a better way for commuters between Central and Western District.  But you will definitely see a lot of things (left and right) at least in the first few hundred meters from the Central area. There are hundreds to thousands (I think) of professionals, locals and tourists walking here and there,  restaurants in the streets jam packed by workers having lunch and an endless row of establishments selling various goods. At a much higher level until you reach the top, you’ll start seeing few people and more residential areas. There, we met more OFW (Overseas Filipino Worker) who are working as domestic helpers.

The Mid-level Escalators has different entrances and we started our journey from the lower entrance at the Queen’s Road Central.

I realized that we have more videos than photos taken in this place so I can only share you a few which are below.

Some random tips and facts about this tourist attraction:

1. No Money Changers. We did not find any money changers going up so we were not able to have lunch. That left us hungry until 3 P.M.  ha ha ha.
2. Plan Your Trip. Mid Levels Escalators operates downhill from 6:00 a.m. to 10:00 a.m. and uphill from 10:30am to midnight so make sure to plan your trip there.
3. Going back. If you don’t want to return to where you started using the stairs,  ride the bus #6 going to Central and hop off in the Peddler’s MTR station, the nearest one if you would like to take it.
4. Entrance Fee: none
5. Date: February 14, 2014
6. Traveled as a couple