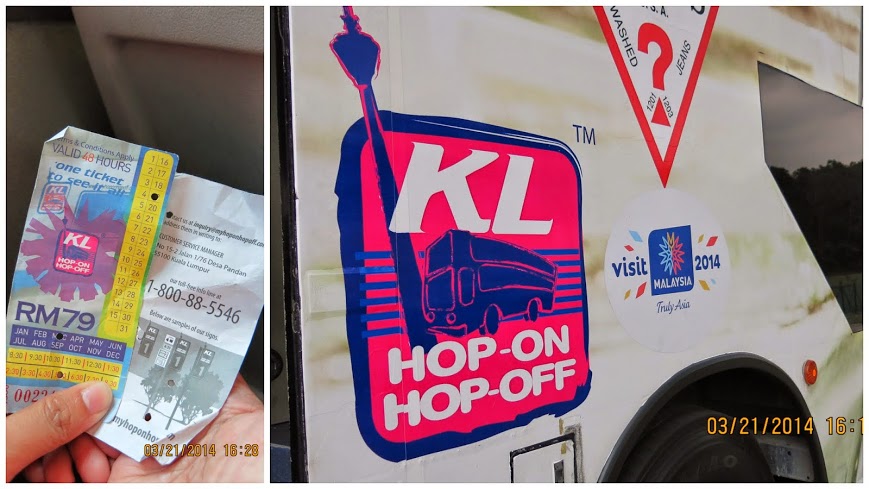 Around Kuala Lumpur with KL Hop On-Hop Off Bus

Three weeks after our trip in HongKong, we went to Malaysia to celebrate my birthday. The weather is hot but not humid. The feel did not surprise us since it’s expected and Philippines has also the same temperature.

It’s our first time in Malaysia and we know for a fact that it’s not easy to roam around like in HongKong where you can rely on their MTR system. While there are available city tour packages online, we still decided to avail the two-day ticket of the Kuala Lumpur Hop-on, Hop-off bus.

So if you are planning to go to Malaysia and considering the KL Hop On Hop Off bus, below are our experience with tips that can help you in your decision making.

Is it worth it? Yes. One day pass costs MYR 48 ($14.83) while a two-day pass costs MYR 79 ($24.41). The city tour costs around MYR 69 ($21.31) per person but its time is limited and you only get to see few attractions and more souvenir shops which really  annoy us. The KL Hop On Hop Off Bus has 23 stops which comprises the major attractions in Kuala Lumpur.  On our first day, we decided not to hop off the bus to see all the 23 stops in one ride. This is just one way to roam around the city without taking the expensive taxi.

When is the best time to use the Hop On Hop Off bus? I suggest that you use it in the morning until at least 4 PM so you won’t be stuck in the traffic. However, there are many tourists during those hours so there will be times that you will be standing long until after the next few stops.

The bus operates until 8PM but it depends on what stop number you are. Some buses have cut off time as early as 7:30 PM based on our experience. The traffic is a huge hindrance that makes this inefficient, though.

Not all buses have open viewing deck but you could try waiting for one. The bus intervals is 30 minutes (if not traffic). Since it’s hot, we just went to the open viewing deck for photo purposes only and enjoyed the view from the upper deck air conditioned area the entire time.

You can buy tickets as soon as you rode the bus. Our starting point is in KL Sentral (bust stop #11)  after our tour in Batu Cave.

Friday is Malaysia’s traffic madness, according to one of the locals there. So it’s literally like you’ll get mad. I highly recommend that you skip this day especially in the afternoon. Friday is our flight back home and second day of our ticket.  We rode the bus at 2 PM to hop off in stop #17 but it got us to the place 3 hours after because of the heavy traffic. We ended up staying in the place for about 15 minutes to catch our service going to the airport at 7PM. The next bus arrived and we were stuck starting 5:15PM. At 6:30PM, the bus is still in KLCC (bus stop #23) and so we decided to hop off and took a whooping MYR 30 ($9.26) taxi for a short ride going to our hotel – Swiss Garden Hotel.  We are buzzer beaters.

Below are some photos I’ve taken during our tour.

Note: The aim of this post is to share our personal experience with KL Hop On Hop Off bus. The service did not ask or pay me to write this article.