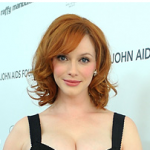 Christina Hendricks has been named America’s best-looking woman in an Esquire cover article, but there’s more than meets the eye with this one.

For starters, though the article appears in a men’s magazine, the fiery “Mad Men” star won the best-looking title via a poll of over 10,000 women. Hendricks nabbed 30 percent of the votes that were cast, beating out the likes of Megan Fox, who got 14 percent of the votes, and Victoria’s Secret model Adriana Lima, who got 17 percent. Fox was last year’s title-holder in Esquire’s annual issue dedicated to the fairer sex.

Secondly — and arguably more intriguingly — the photo that appears on the cover of the magazine looks a little different from the sultry redhead who has garnered almost as much attention for her looks as she has for her performance on the AMC television show.

If you were to walk past a newsstand featuring the magazine, you might, at first glance, mistake the covergirl for Julianne Moore. While her curves are radiant in a tight black dress, Hendricks’ overall look seems a little unfamiliar: Her blue eyes seem darker, and so does her wavy auburn hair.

The accompanying photo spread looks a bit more like the Hendricks we know and love. Sizzling in a desert shoot, basic-cable’s favorite secretary poses next to an abandoned trailer, crawls across the sand, and bites into a juicy slice of watermelon.

Hendricks’ spread comes with a personal letter addressed to all men. In addition to discussing her hatred of Facebook (“an invasion of everyone’s privacy”) and love of Scotch (“the most impressive drink order”), Hendricks lays out pointers for behaving around women: “There are better words than beautiful. Radiant, for instance. It’s an underused word. It’s a very special word. ‘You are radiant.’ Also, enchanting, smoldering,
intoxicating, charming, fetching.”

The buxom beauty certainly doesn’t shy away from discussing her signature figure either: “We also remember everything you say about our bodies, be it good or bad. Doesn’t matter if it’s a compliment. Could be just a comment. Those things you say are stored away in the steel box, and we remember these things verbatim. We remember what you were wearing and the street corner you were standing on when you said it.”

One can’t help but wonder where Hendricks was standing when the women of America paid her and her body the highest compliment of all.

Article and photo by: www.omg.yahoo.com